BIGOTS BEWARE … A CHANGE IS FINALLY ON ITS WAY

After hovering around Tucson AZ for a week in a Class B RV, it’s become clear that anyone who had a chip on their shoulder about some dreamed-up racial generalization, might soon become disoriented about who to be rude to.

After passing through San Antonio and stopping to visit the Alamo … the hallowed ground of my namesake … Davy Crockett, I left wondering about running into stored prejudice as I drove on to Phoenix. 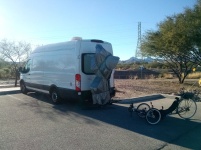 After a few months of skirting Mother Nature’s winter sting, I’ve been huddled wintering Tucson’s 3-dog-nights (in the 30’s) in my 3-season Ford Transit van. The last week’s been a busy time of dodging the threat of a corrupted 130K word book manuscript (that publisher Allen Ketchersid … Ketchpublishing.com … just saved), jumping through all the phone-holds and directions to get signed up for Medicare while trying to get a writing/riding/TKD form activity rhythm down … and still trying. 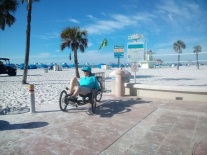 Earlier, I’ve been lucky to have ridden trikes with my visiting older brother on FL’s Van Fleet RT and with my mom on Clearwater Beach FL who were both visiting my Orlando area-based younger brother who took us to Disney World where he’s a security officer. 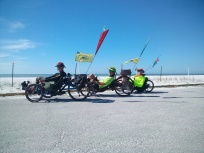 I got to ride several days with SFS originator Dan Zimmerman, Mae, and our guide and Dunedin FL Spokes Fighting Strokes new chapter leader and Senior Olympics trike race finalist Will, all around the St. Pete area. I got to watch Dan do his magic on a group of 20+ physical therapists and work with a stroke survivor.

It’s been a rich experience full of other one-of-a-kind sites and places my recumbent tadpole has taken me in the last 2 months.

Even though I hate modern technology, times during a super-comfortable van ride and while stealth van-camping, a few Pandora stations have enlightened me to music so satisfying that I’ve not one time listened to my life-long collection of albums stored in iTunes. I’ve fell in live with my copilot who’s made traveling through the complicated larger city spaghetti bowls a piece of cake… compared to previous travel sagas. I call her Cindy for some reason.

… her last name is Google … she’s made finding places of all sorts as easy as pushing the “start” button … all of my map books, truckers’ map and interstate books…put to rest…

A week of people-watching and hours of sitting while writing in Tucson coffee shops has made it clear to me that in the younger generation, human DNA is being randomly mixed up. In this area, American Indian, Mexican, Asian, Black, and White genomes have been combine in ways that can’t be detected “judging” just by physical appearance.

A SENSE OF COMBINE STRENGTH

It seems that the feeling of racism that cuts short so many paths of progress sometimes detectable in social settings is totally absent. With this fly-in-the-ointment gone a feeling of combine strength seems to be present. Look out for advancements in American ethos and USA world positioning in future years that are only possible because of the originators’ blindness to prejudice.

A BIG SMILE OF MY FACE 🙂